ARCHIVE LISTING - THIS VESSEL IS NOT FOR SALE!

*** ARCHIVE LISTINGS ARE PROVIDED FOR INFORMATION AND RESEARCH PURPOSES ONLY *** 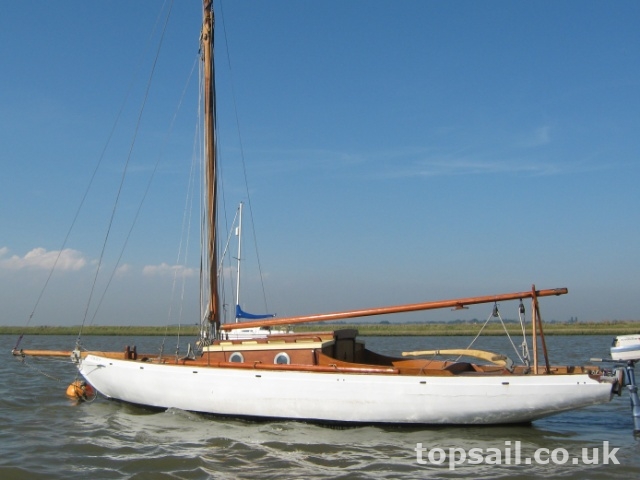 A Brief History (as provided by a previous owner)

Looking through an old Yachting World survey of yachts available to those wishing to take up sailing after the second World War, one of Chloe's previous owners (Trevor Reed, who ran a metal mast firm in Dartmouth) decided she was of the Coronation Class, built in Scotland at the time of the coronation of George VI in 1937. This is all we know of Chloe's origins. Her relatively light-weight construction of pitch-pine on oak timbers, with no grown or sawn frames and nails turned over, rather than riveted over roves, supports the idea that she was built for sheltered water sailing such as might be enjoyed around the Clyde. It also seems likely that she was originally rigged as a Bermudan sloop, with the mast stepped in a wooden tabernacle (there is a photograph of her in her original condition which shows a wooden tabernacle, but not her mast or rig). The (gaff) mainsail that came with her when Peter Crook bought her looked as if it had been cut down from a Bermudan sail, and showed signs of once having borne a "C" but also might have been acquired from some other source.

Trevor Reed decided that in view of Chloe's limited cabin space he would convert her to an open day boat and removed the deck and coach- roof. He also had a new larch shear-strake fitted by Peter Nash, who later went on to greater things. Peter built the 40ft gaff cutter Chloe May single-handed (see Classic Boat Jan/Feb 1988 p116 and February 1998 p26) before going into partnership with John Holden to found the Dartmouth traditional boat-building firm of Nash*Holden.

As is so often the case Trevor decided he did not have the time to complete the project and sold Chloe to one-time shipwright and Island Cruising Club instructor Conrad Born. Conrad decided to rebuild her as a cabin boat with the hope that he might be able to sail her to Sweden to visit his children. He re-decked Chloe, re-rigged her as a gaff sloop, and ran out of money.

In 1977 Conrad was working as an instructor at Courtland's Activity Centre, just outside Kingsbridge in South Devon. The activity weeks they were running included two days' sailing instruction with the Island Cruising club in Salcombe. On one particular week the second sailing day was cancelled because the Club thought the wind was too strong, so Conrad took two willing (foolhardy?) participants sailing in Courtland's dinghy and taught them to sail with their eyes closed and without a rudder.

One of these two, Peter Crook, met Conrad again on a later visit to Salcombe and was shown Chloe, Peter's deposit for the purchase enabled Conrad to build a simple interior with two bunks and lockers. She was surveyed by a local boatbuilder who obviously didn't trust strange Scottish boatbuilding methods and insisted that she should be re-fastened at least below the waterline with copper nails "properly" riveted over roves. Conrad and Peter did this (they double-fastened her rather than removing the original fastenings) between tides on her mooring at Wiscombe Bay at the head of Batson Creek in Salcombe Harbour. It was February and part of the work was done in the snow!

Peter's first sail was quite lively and left him thinking that perhaps he should fit toe-straps so that he could sit her out like a dinghy to keep her upright. Luckily Conrad's father had a mooring at South Sands consisting of two large iron pigs that he no longer needed. After retrieving these from the seabed the floorboards were cut around them to hold them in place and, although she remained tender, Chloe no longer acted as if she were about to capsize. The iron was later replaced with lead sash weights which fitted much better in the restricted bilge space and allowed the floorboards to be replaced intact.

Peter happily sailed Chloe single handed in Salcome Harbour and to and from Plymouth and Dartmouth for several seasons. Then as he was raising the mast on the night before she was due to be craned in from Salcombe car park at the end of fitting out the forestay slipped from Peter's grasp and the mast fell backwards. Unfortunately the tabernacle had the pivot bolt below the level of the cabin top and the mast neatly severed itself where it hit the top front edge of the cabin. This marked the start of a period of neglect during which rainwater found its way around a tabernacle bolt and rotted a significant area of the ply deck and some of the deck beams. However by 1985 Peter found himself in the unusual but pleasant position of being financially comfortable, and was able to contemplate having Chloe professionally repaired. In fact he had been sketching ideas as to how she could be rebuilt for some time, and he was now able to put these into practice.

Mike Atfield, a Salcombe boat builder who had donesome repair work on Chloe in the past agreed to undertake the work. This involved stripping her down to a bare hull, making sure was sound, and then fitting new deck beams, deck, coach-roof, cockpit, interior and making new spars. Peter Ede made the tabernacle and other fittings such as the toe-rail brackets, gammon-iron incorporating chain rollers, and chain stopper. New rigging was designed and fitted by Wilf Dawson and new sails made by John McKillop of Kingsbridge.

This is a lovely little classic yacht which oozes character and charm, and is equally suited to estuary or inland sailing. She is for sale due to a change of plans, and is currently lying ashore on her trailer.

ARCHIVE LISTING - THIS VESSEL IS NOT FOR SALE!

*** ARCHIVE LISTINGS ARE PROVIDED FOR INFORMATION AND RESEARCH PURPOSES ONLY ***